Akim Williams, fresh off winning the 2016 Tampa Pro (his first IFBB pro win) and clinching his first ever Mr. Olympia qualification, talks to Dave Palumbo on RXMuscle’s 1 on 1 interview show, ‘Live With.’

Considered one of the strongest bodybuilders on the IFBB circuit, Williams has carved an identity for lifting freakishly heavy weight, to the delight of his large social media fan base. His popularity for being a beast in the gym has earned him the nickname of the “BK Beast”, an homage to his Brooklyn roots.

Akim talks about the journey to punching his first pro win, his thoughts on competing at his first ever Mr. Olympia competition, and what we can expect from him in the near future. 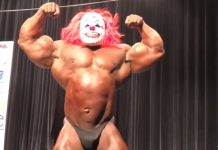