David Henry joins Dave Palumbo on RXMuscle’s “Iron Road to the Olympia”. Henry, dubbed the “Original Giant Killer” for his landmark win at the 2008 202-division Olympia, comes into this Olympia as one of the top threats to challenge Flex Lewis’ reign in the 212 class.

Henry, known for having one of the top upper-bodies in the 212 division, finished runner-up at the 2017 Arnold Classic, behind Ahmad Ashkanani. Can “The OG Giant Killer” bring home a top-3 finish at the Olympia? 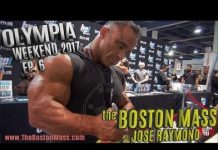