Latorya Watts has established her dominance in the Figure division over the last two years, and looks to make it two Ms. Figure International titles in a row at the 2016 Arnold Classic, but first, she speaks to Dave Palumbo on RXMuscle’s Road to the Arnold Classic.

Watts, who burst to the top of the Figure division at the 2015 Olympia, dethroning perennial champion Nicole Wilkins, had a triumphant 2016 retaining her Olympia title and winning the Ms. Figure International title.

To repeat at the Arnold Classic, she’ll have to hold off strong challenges from Candice Lewis-Carter, Genn Strobo, Cydney Gillon, Swann De La Rosa, and others. 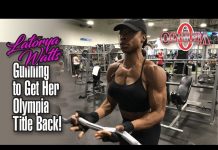